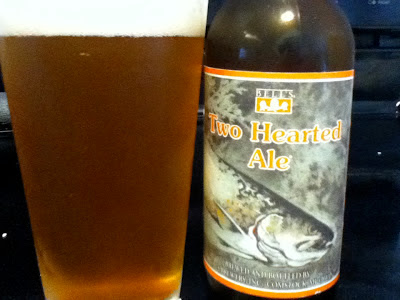 Usually, I write about new beers (to me, at least). This week, I’m pulling out a favorite for the last year or so.  I discovered Bell's Two Hearted Ale on tap during a trivia night at Copper Rocket Pub in Maitland, FL and soon went looking for it in bottles. The name and the trout on the label reference a river in Michigan, popular for fishing and name-checked in a Hemmingway short story.

Two Hearted Ale is a full-on India Pale Ale - packed with hops, but not just a blast of pine that strips the enamel off your teeth. It pours with a thin head, a slightly-cloudy dark amber. At first sip, you get a lemony citrus. Then, that apricot/Christmas tree flavor in most IPAs. Finally, a surprising essence of roses. (No joke.) The malt doesn’t really assert itself, just adding the right sweetness to keep all those Centennial hops from turning peppery or bitter.

Bell’s Two Hearted Ale is a beer for both the hopheads and the casual adventurers. It’s full of strong flavors, but never harsh -- substantial, but not heavy. Just drink it already. 7%ABV

Posted by Grahamopedia at 3:42 PM