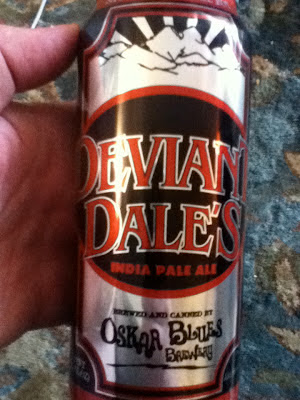 Yep, craft beer in a can. Think about it … no one complains that draft beer comes in that giant aluminum can called a keg. Cans keep out the sunlight, so beer doesn’t skunk. It weighs less than a bottle, so it ships cheaper. No one’s going to start a barfight by swinging an empty can at your forehead. Everyone wins.

Colorado’s Oskar Blues Brewery was the earliest of adopters, canning Dale’s Pale Ale in 2002. The brewery added a newer, faster, canning line earlier this year, one that could also handle 16-ounce tallboy cans. The first beer off the line was Deviant Dale's, a dry-hopped version with 8% alc.

Popping the tab and drinking straight from the can, it’s powerfully piney with a floral vibe at the edges and a flicker of anise at the finish. The malt is more assertive than last Sunday’s review, but with all these bitter hops, you need that sweetness.

Pouring the other half into a pint glass, Deviant Dale’s is a reddish-orange with a good half-inch of white foam. It’s a few degrees warmer now, so the malt and “heat” from the alcohol are more forward. It’s right on the edge of heaviness, but doesn’t cross the line. Powerful, but balanced.
Posted by Grahamopedia at 3:36 PM