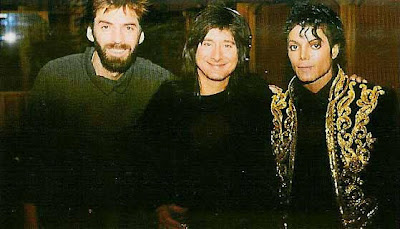 Two 1980’s powerhouses team up on one single, the voices behind “"Lovin', Touchin', Squeezin'” and “Footloose,” and you’d think that masterstroke would stick around. Nope. Somehow it’s vanished from the radio. (Sorry, no Michael Jackson in this post -- but how could I pass up that photo?)

“Don’t Fight It” really belongs to Kenny Loggins, since it’s from his 1982 album, High Adventure. Add in “The Voice,” Steve Perry, and you’ve got a superduo that went as high as #17 back in 1982. I remember owning it as a single-sided 45. That’s right, no b-side. Just flat vinyl to dull the record-player needle of any high school sophomore who wanted to see what would happen.

To add insult to obscurity, I can’t find an official video, but I can find TWO versions from K.I.D.S. Incorporated.  Here’s all three. Take note that Renee Sands sings how “moonshine will make a man go blind,” in the first K.I.D.S. version, but by the time Martika ("Toy Soldiers") is old enough to take the  lead, she makes it safe for the little ears by singing “sunshine.” Yes, that's Stacy Ferguson (aka Fergie) lipsynching away in both.

Posted by Grahamopedia at 6:48 PM