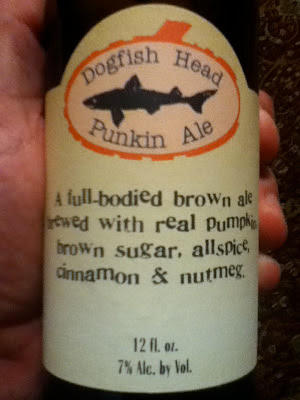 I’m always confused by how quickly pumpkin beers hit the shelves in the fall. If the pumpkins are being harvested right now, how did they get in the beer that’s in the supermarket right now? Plus, they tend to taste more like cinnamon toothpaste than grandma’s pumpkin pie.

I like Dogfish Head’s pumpkin beer over others I’ve tried because it tastes like beer … and not like a spice rack. The malts are in balance with -- instead of being overwhelmed by -- the cinnamon, allspice, and nutmeg. More surprising (to me) is that I’m not a brown ale fan. They can be heavy and sweet, but even with organic brown sugar added, this one’s got a little bite. I’m going to guess that the pumpkin meat Dogfish Head adds in the mash cuts the “sweet.”

Dogfish Head Punkin Ale pours the color of, well, pumpkin butter and the aroma carries the promise of all those spices without slapping you in the face. It's subtle enough to be more than an autumn novelty, even deserving of a second or third bottle, but beware. At 7% ABV, this great pumpkin could sneak up on you.
Posted by Grahamopedia at 2:56 PM