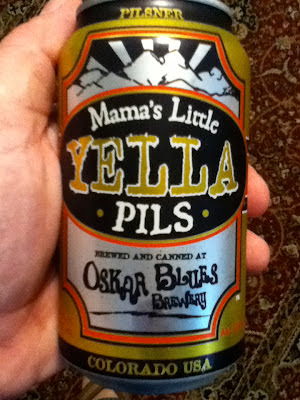 All examples of how we Americans take a beautiful, authentic cuisine and bend it to our Wonder Bread will. That’s pretty much what happened to the Czech beer called pilsner. That six-pack of BudMillerCoors adds rice to the traditional mix of malt and hops. It's cheaper, but also waters down the flavor. Mama’s Little Yella Pils (from Oskar Blues in Colorado) sticks to the original recipe.

At the pour, Mama’s Pils seems a lot like the other “yella” beers. It’s a pale gold with a sturdy white head that fades to a trace across the surface. As for flavor, it’s also similar to all those other beers, just “more.” The sweet malt and faint hoppy bite are there. If you’re a fan of the Big Canned Beers, you might say this isn’t as crisp. If you’re not a fan of the biggies, you'd say Mama’s flavor lingers longer with a little peppery finish.

Mama’s Little Yella Pils is a well-made pilsner, but it’s for a market that might not exist. Fans of an ice-cold fizzy Bud are going to think it’s overpriced for the incremental bump in quality. Beer snobs will pass it by for an IPA so green it pulls the enamel off your teeth. Mama’s Little Orphan is 5.3% ALC.

Posted by Grahamopedia at 3:15 PM