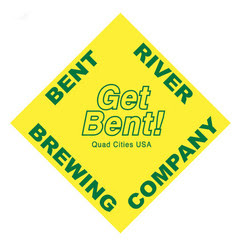 No bottle photo for you on this one, just a logo I snagged from the brewery website. Why the laziness? I’m on the road, visiting my dear sweet mother in the Quad Cities …which is actually five cities. Which one you leave out depends on whether you live on the Iowa or Illinois side of the river. (Sorry, East Moline.)

While mum and I ate big, hot slabs of cow and lamb at Bass Street Chop House, a beer called to me. Uncommon Grounds is a blend of oatmeal stout and coffee from Bent River Brewery in nearby Rock Island, IL. It’s called “Bent River” cuz the mighty Mississippi runs east and west as far you can see in the Quad Cities. Really screws with visitors’ heads.

Uncommon Grounds came to me as a draft is a standard pint glass, almost no head and smelling just like an iced coffee. Seriously, almost no beer whiff at all. That first sip is strong on coffee too, dark and roasty - a tad sour, but not bitter. As you drain the glass, the malt sweetness and the “milky” part of the stout assert themselves, rounding off the sharp edges. It’s not just a novelty here to mix the hangover cause and the hangover cure. The flavors work together -- and also worked as a contrast for the medium-rare Delmonico I put away.

Posted by Grahamopedia at 1:52 PM