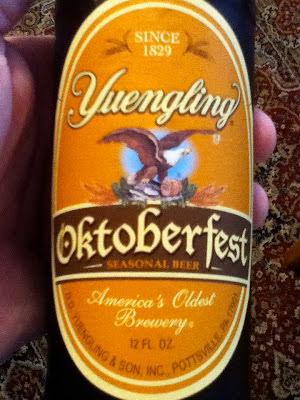 You might think it weird to drink an Oktoberfest beer now, but German Oktoberfest actually starts in late September, so I’m not jumping the gun by much.  In fact, these copper-colored beers are called Märzen, which is German for "March." That’s when these beers are traditionally brewed, kept all summer, and then tapped as the temps come down again.

Yuengling’s Oktoberfest is going to be familiar to fans of the Pottsville “Traditional Lager,” just amped up a bit. The beer pours a dark orange with a sturdy half-inch head in my pint glass. The aroma is faint, but definitely malt and grain. On first taste, you get a little sweetness, which gradually fades as sour and metal/mineral flavors work past the caramel.

For a Märzen, Yuengling Oktoberfest is a little light on the malt, but the price is right for a casual supermarket six-pack -- not too heavy for early September, but sturdy enough for autumn.
Posted by Grahamopedia at 3:49 PM