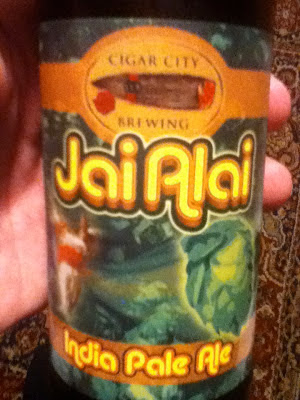 Cigar City Brewing usually names its beers to mark a bit of Tampa Bay history. I've previously reviewed Tocobaga Red Ale -- named for the vanished Native Americans who lived in Tampa Bay before the Spanish and Europeans -- but that was back when this blog was just a Facebook thing. (I'll dig it up and repost soon.)

Cigar City's Jai Alai IPA commemorates a much smaller bit of vanished history – the frontons for that sport with the basket and the ball that can travel well over 150 mph. St. Pete still has an amateur court, but I believe the closest pro matches are in Orlando.

Enough history, I’ve got a beer sitting in front of me. Jai Alai IPA pours honey tan with just a slight haze. The head’s a sturdy half-inch with a bit of that root-beer-float look across the top. The whiff is definitely hoppy/piney. Let’s dive in.

That first pop of bitter is followed by a sweet fullness. Some call the fruity essence “orange” or “pineapple, but it’s apricot or even peach for me. Yes, a lot of folks (particularly Americans) love their hoppy IPAs, but Jai Alai has a complexity that many others don’t. It’s not just a blast of green. The bitter hit reminds me of black tea and the malt is forward enough that the hops don't smother.

With its light carbonation and easy drinking, Jai Alai doesn’t go down 150-mph fast, but beware… that smoothness hides the heat of 7.5% ALC.

Jai Alai IPA is tough to find outside of Florida, but there is hope. The brewery (out by the Tampa airport) just started putting Jai Alai in cans – making it cheaper and easier to ship longer distances. There’s no music with the video below of the new canning line, so start the second video first as my personal soundtrack recommendation.

Posted by Grahamopedia at 3:26 PM