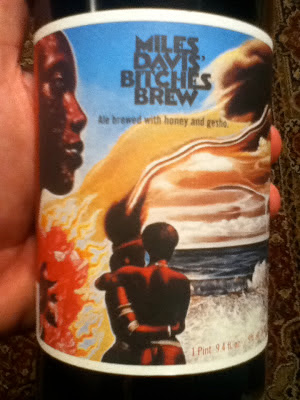 OK, before we get started on this specialty beer from Dogfish Head Brewery in Delaware, some soundtrack music…


Sony asked Dogfish to create this blended beer a couple years back for the 40th anniversary of Miles Davis’ classic jazz-rock fusion album of the same name. From what I can piece together by reading the label and a little Googling, Bitches Brew is a stout cut with honey beer and flavored with gesho (an aromatic African root used to flavor beer much like Europeans use hops). Dogfish used Miles’ chili recipe as a guide. They wanted this beer to pair with it.

The brew comes in an almost-wine-sized bottle and pours darker than Guinness. I mean NO light is getting through this stuff. The head is the color of a strong latte and the aroma is roast grain, coffee, and just a little soy sauce.

The first sip is thick and sharp, but not sour. Those roasty and chocolate flavors are right up front with a little anise in the honeyed finish. I also get vanilla and, no lie, redeye gravy. Bitches Brew doesn’t present like a blend, but a well-rounded stout with a sweet, milky finish.

I’ve never tasted gesho before, but I see it described as “earthy” and “herby.” Maybe that’s the vague chicory flavor I get or it could just be the abundance of roasted grains.

So, am I going to try and wrap up by finding a ham-handed analogy that just maybe fits both the beer and the music? You bet! Bitches Brew isn’t for everyone. Some are going to find it unpleasant or even repellant, but start off with just a little and see if it grows on you over an hour or so. You might be rewarded … or just miss your Guinness and Diana Krall. (I enjoy both of those too.)

Posted by Grahamopedia at 4:16 PM