Why Don't I Hear This Anymore? 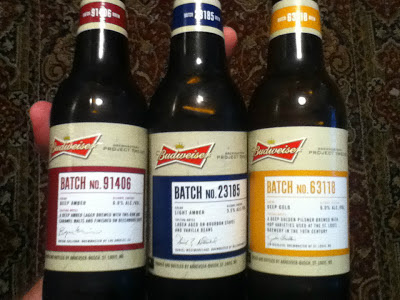 This last spring, Budweiser revealed it had asked the brewmasters at its twelve American plants to come up with new “tribute” beers. Now, the brewmasters didn’t get to go completely crazy. The rule from on high was that they had to stick to “all-natural” ingredients, the beers had to be lagers, and they had to use the same proprietary yeast as regular Bud.

Internally, those dozen brews were reduced to six and after taste tests around the country, three beers remained. That trio is now in supermarkets as a special 12-pack, four bottles of each. They’re named for the zip codes where they started. (Your actual bottles might have come from whichever brewery is closest to you or had the room to brew.)

Batch 63118 (St. Louis): The label promises a golden pilsner brewed with the kind of hops used during the 19th century at the St. Louis Anheuser-Busch brewery (Hallertau and Tettnang). The label also promises 6% ALC. (Regular American Bud is 5%.)

Poured into a pint glass, 63118 is a yellow-tan with a faint malty aroma. A few sips confirm it’s maltier and deeper than regular Bud, but not by much. Those touted hops are buried. There’s a little sour-sharp-floral edge, but nothing I’d call “hoppy.” Finishing sweet, Batch 63118 might hint at what a Budweiser was like around 1885, but beyond that, it’s not memorable.

Batch 91406 (Los Angeles): This time, we get a “deep amber lager brewed with two-row and caramel malts and finished on beechwood chips.” The Bud website also reveals four types of hops and 6% ALC.

91405 is a brassy amber in the glass with (yes, again) a faint malty aroma. It’s got a slighty richer flavor and mouthfeel that Budweiser, and definitely more browned malty flavor … but that’s because regular Bud doesn’t have any of that. Batch 91406 comes off as a poser - just not distinctive or memorable or flavorful as even Budweiser's attempt to take away Yuengling shelf space, Budweiser American Ale.

Batch 23185 (Virginia): I’m expecting the most from this one. It’s aged on bourbon staves and vanilla beans, so it should at least taste like that stuff, right?

The brew pours about the same color as 91406 with just the barest whiff of vanilla. It’s creamy going down and there’s definitely that hit of ‘nilla, but the bourbon essence is so mild as to get lost behind the already-mild malts. At most, it comes off as caramel. Batch 23185 has the same sweet finish as 63118 and 91406, but it makes more sense here. 5.5% ALC.

The bourbon-vanilla is the best of the three, but don’t expect true craft beers. Budweiser loyalists will probably groove on the trio because they’re all variations on the same Buddy tune. If you’re not a Budweiser drinker, you probably won’t like them for the same reason.

Posted by Grahamopedia at 1:56 PM No comments: 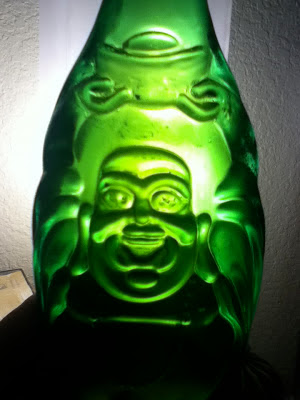 As I understand, Buddha was not a fan of alcohol, but the enlightened one doesn’t have a team of lawyers on retainer, so … Lucky Buddha Beer! The bottle is an eye-catcher, the kind of thing that will hold a place of honor in frats and dorms across America. It’s heavy green glass with The Teacher smiling right at you, delighted you chose him over cotton candy-flavored vodka.

Originally brewed in Australia -- Lucky Buddha now comes from the Hangzhou Qiandaohu Beer Company in China –which is partially owned by Japanese brewer Kirin. After all that world travel, I could use a beer.

Lucky Buddha pours a very, very pale yellow with a thin, white head. Somewhere between a Bud and a Heineken, Lucky B is so mild as to be almost flavorless. Coming from China, it’s a very ricey brew with just the faintest hint of malted barley. At the finish, a lingering alkaline finish like a pinch of baking soda.

Lucky Buddha is just a novelty beer, nothing awful, but nothing special either … and at $10 a sixer from Target, not worth trying more than once. The Lucky Buddha bottle feels hefty, which makes me wonder which costs more to ship from China’s eastern coast – the little hollow statues or the beer inside.
Posted by Grahamopedia at 4:29 PM No comments: 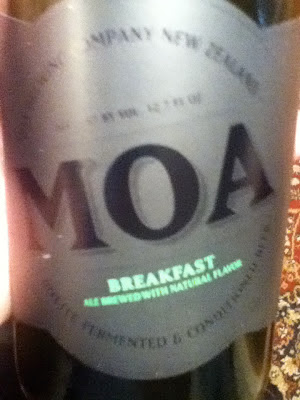 No one flinches if Sunday brunch features a make-your-own Bloody Mary bar or all-you-can-stomach mimosas, but print “breakfast” on a beer bottle and get ready for trouble. When Moa, a New Zealand brewery, started Breakfast Beer in 2011, it was accused of “normalizing pathological behavior.” Of course, Moa could have just named the beer something else, but then there wouldn’t have been hundreds of articles and blog posts (like this one) all over the world, giving Moa free publicity.

Moa was founded by winemaker Josh Scott and that background inspires his beers. Many are bottle-conditioned, so there’s some yeasty sediment or “lees.” With Breakfast Beer, Moa says it “can either be poured carefully off the lees or alternatively with the lees mixed in if a stronger yeast character is desired.” Let’s go with “stronger,” shall we?

First, you pop the cork on the 12.7-ounce bottle. (5.5% ALC, BTW) I definitely smell the cherry essence that was promised, and worryingly, a little skunk. Very pale straw color on the pour with frothy white head – and cloudy, since I did my best to kick up that deceased yeast.

It’s got a thicker mouthfeel than I anticipated - not sugary sweet, but not bone-dry either. I can’t decide whether the vibe is more “cherry” or “cherry candy.” For better or worse, it’s going to remind some drinkers of cough drops. It’s definitely a wheat beer. I also get hints of banana, raspberry, and (despite the green bottle) a hint of skunk funk.

Moa Breakfast Beer is interesting and makes me curious to try other more conventional beers in the line, but I'm not sold that this is anything more than a novelty - fun once, but once might me enough. The next time you’re having migas or hash and eggs on a late Sunday morning and want a little something along side, I’d suggest a Guinness or a freshly-made michelada. 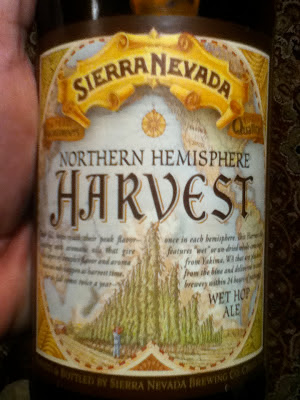 I remember Sierra Nevada as my first IPA. This is back when India Pale Ales and that green/weedy/lemony thing were a novelty to most Americans. Now, I dare say, there’s a hops explosion in the world of non-supermarket beer.

It only makes sense that Sierra Nevada also introduces me to “wet hops” beers. Usually, IPAs are brewed with dried flower clusters of Humulus Lupulus. (Yeah, I googled it.) You know, those things on the beer label that look like pine cones. Sierra Nevada swears this Northern Hemisphere Harvest is made with hops that are in the brewery within 24 hours of picking. In other words, this is a once-a-year beer.

On the pour, you get a dark-tan ale with a hint of red and a sturdy off-white head. (When I first poured, I swear I saw a hint of green, but that must be wishful thinking.) The aroma is hoppy, as you’d expect, with a powerful citrus note.

What I taste is an exceptionally-grassy IPA – almost, but not quite, bitter to the point of unpleasantness. There’s serious lemon notes, a little black tea bitterness, maybe even rose, black pepper ... and hops, hops, hops. Malt sweetness cuts the green, but there’s serious resin here.

Posted by Grahamopedia at 3:13 PM 2 comments: