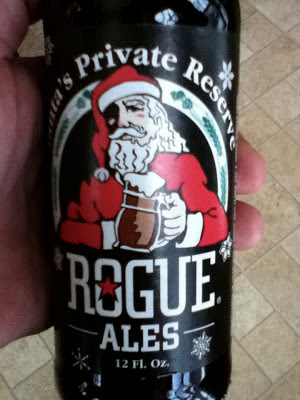 I wish it was Christmas today … so this review wasn’t a few days behind the calendar. Oregon’s Rogue Ales brews both outlandish beers - Chocolate Peanut Butter Banana Ale - and the slightly more traditional such as Dead Guy Ale. On this late December night, I’ve got a single bottle of the red ale Santa’s Private Reserve. (Thanks, Grace!)

Pouring, the color’s a little bright for “coppery,” so let’s go with vermillion. As you’d expect, the aroma carries both malt and pine, but if I try really hard, I can pick up a little rose and honey.

Santa’s Private Reserve is definitely a hoppy beer, and true to the season, leans toward spruce. The “green” dominates, but malt’s there in the background and a little hay too. I get a different bitter on the tip and the back of tongue, but neither lingers, quickly washing away until the next sip.

If you love chewy beers, you might argue Santa’s Private Reserve is a little low on flavor for a Christmas beer. I’m going to come at it from the other side and say that Santa’s has holiday zip, but isn’t so thick, spicy or alcohol “hot” that you have to stop at one. 6% ALC

Posted by Grahamopedia at 3:55 PM