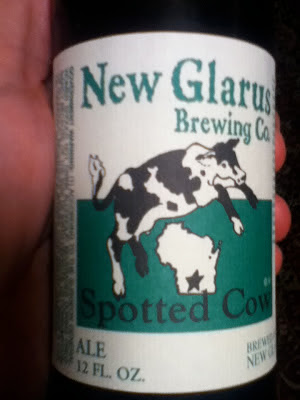 This week, I’m digging in the back of the Norge icebox for another bottle from New Glarus Brewing. The stuff’s usually only found within a few miles of the Wisconsin border, but my brother disguised a few as a box of chocolate-chip cookies and got them to the Sunshine State.

Spotted Cow Ale is cask-conditioned, so it’s yeasty/cloudy in the bottle – although not as foggy as I expected. It pours a pale straw yellow with not much of a head and just the barest aromas of corn and apple. It’s lightly carbonated – sweet, but still crisp on the finish. The corn flavor is forward, but there’s also that bready touch from the barley and malt.

Some beery folk might be underwhelmed because Spotted Cow doesn’t kick you in the teeth with hops or rye or coffee chocolate malts. Where it breaks away from the six-pack is the execution. The flavors are rounded and the harshness of many supermarket beers just isn’t there. So, I guess what I'm saying is that Spotted Cow is a mild American lager done properly. 4.8% ALC.

Posted by Grahamopedia at 2:43 PM