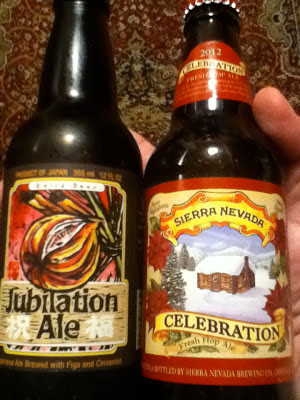 I promised I’d dive into holiday beers, so how about two?  One you’ll probably be able to find at the supermarket. The other called to me from the shelf at Total Wine. Someone had abandoned a single bottle in the wrong aisle. In the spirit of charity, I took the orphan home ... and drained it.

Baird Beer was started by a husband-and-wife team in Numazu, Japan along Suruga Bay. Since 2000, a small brewhouse and restaurant has grown into several taprooms and a commercial brewery. Among the beers they make is Jubilation Ale, flavored with figs and cinnamon, meant for welcoming the new year.

Jubilation pours reddish-brown with a head of large bubbles that fades by half, but then stays. Specks of (I assume) fig fleck the beer, hanging in the glass without sinking.

Jubilation is sweet and malty, very much a wintry brown ale. The pulpy bits make it almost velvety. I don’t taste the cinnamon at all. What I get of the fig is more of an aftertaste, a cleanness that powers malt off the tastebuds and keeps it from cloying. Interesting, but I’d like to taste more of what’s on the label. 7% ALC

Sierra Nevada Celebration Ale
I wrote about another wet-hopped ale a few weeks back. Basically, they’re made with the first fresh hops of the season – less than a day out of the field -- instead of the dried hops used by many all year long. Wet-hopped ales are generally even more piney that IPAs and often lemony. Sierra Nevada considers theirs as a Christmas brew.

Celebration is a clear copper in the glass with a sturdy white head and , of coursem a strong aroma of hops. The flavor is very resiny with hints of clean citrus and tea. The beer also has a malty backbone that keeps the hops in balance and not overpoweringly green. This is a balanced brew that’s wintry without diving into novelty ingredients to get the job done. 6.8% ALC

Posted by Grahamopedia at 4:13 PM