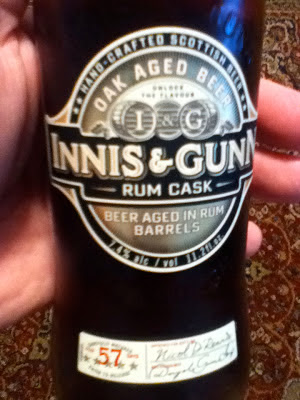 Before Scotland’s Innis & Gunn Brewery started bottling its unique oak-barrel-aged ale, the brewmaster was making a similar beer for a whiskey distiller. (They don’t say, but it’s most surely Grant’s.) The beer was used to season whisky barrels and then dumped – thousands and thousands of gallons down the drain. Turns out, the distillery crews were drinking some of the waste and enjoying it. I first had the original Innis & Gunn last year, and while I suspect my bottle was skunked, it has interesting notes of wood and peat, vanilla and cinnamon.

Now, I’ve got a bottle of an Innis & Gunn variety that does its time in both fresh oak barrels and barrels that held maturing rum. In the glass, it’s an orange-red ale and very fragrant. I can smell the rum (almost like banana), the oak, and malt. What little head there is doesn’t last long.

The mouthfeel is thicker than expected, but not overly heavy. The oak and fruity rum are right up front, and while that could be overwhelming, the bite is nicely rounded off and balanced by malty, caramelized, brown sugar sweetness.

There’s a bit on alcohol “heat,” but you’d want some of that in a rummy beer. At 7.4%, be careful it doesn’t sneak up on you. I think I like this better than the “original” Innis & Gunn. A beer this dark and deep usually says “winter” to me, but the rum barrel influence is putting it on my summer schedule.
Posted by Grahamopedia at 3:44 PM No comments: 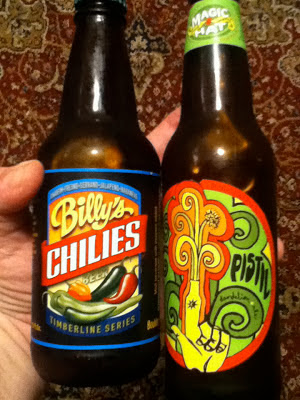 Billy’s is an unfiltered wheat beer that pours a cloudy, pale peach. There’s definitely that “green” aroma of peppers, like say in a queso dip. After a couple healthy pulls off the glass, I get a little heat at the back of the throat. After a couple more, it’s lingering on the roof of my mouth. If you can handle Flamin' Hot Cheetos, you can surely handle Billy’s Chilies. That said, there’s not any beer flavor here. Fun to try, but doesn’t demand a second bottle.

Pistil Dandelion Ale from Vermont’s Magic Hat Brewing is called a “summer ale” on the website, but is only in release from January to March, so go figure. According to the video, Pistil started as part of a variety pack and has now apparently earned the right to be sold in solo sixers.

As I understand, Pistil is unfiltered, but my glass looks clear and straw-yellow. I can definitely smell the hops but if there’s such a thing as dandelion whiff, it’s subliminal here.

That first sip hits you with a sharp/bitter note that’s unusual but not unpleasant. At first, the lemony hops made me think sour, but after a couple more sips, it’s more astringent than puckering. I’ve lopped the heads off countless dandelions while mowing the lawn. I suspect that once summer actually gets here, Pistil would make a good lawnmower beer.
Posted by Grahamopedia at 4:01 PM No comments: 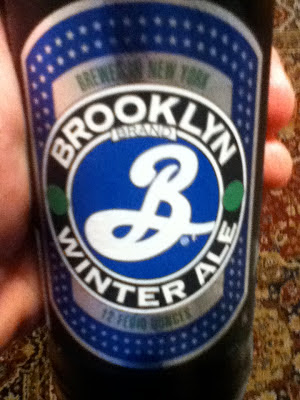 Orlando is damn warm this January weekend, so of course, I’m busting out a bottle of a malty Scottish (style) ale that's traditionally meant for snowdrift sipping. I’ve been a fan of Brooklyn Brewery's  Pilsner since I first had it just across the East River in Manhattan. Now that you can find even the seasonals in far-off Florida, I’m a happy man.

Brooklyn Winter Ale is a deep ruby pour with an off-white, frothy head. Light on aroma -- malty, but not brutal, with a little sharpness coming through.

The taste backs up what the aroma hints at. It's definitely malty and bready, but not heavy like many winter beers. I get a nutty finish and even a tiny, tiny bit of roast coffee, but again -- just a hint. Hops aren’t pronounced, but there to cut through the malt with “clean.”

I hear that Brooklyn Brewery's original Winter Ale was spiced, but there's no cinnamon or nutmeg here. This Winter Ale has got all the elements of chilly weather beers, but it's not as chewy as some. For a Florida boy who doesn’t need to fortify himself against a blizzard, this lighter Winter Ale works just fine.

Posted by Grahamopedia at 3:27 PM No comments: 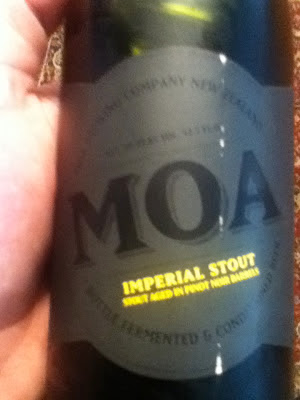 Look at that bottle up there. Never before today has a beer tried to assassinate the glass I set out for it!

Here’s how it went down. I was loosening the wire cage around the cork of New Zealand’s MOA Imperial Stout and BOOM PING – the plug blew out and ricocheted off the red wine goblet I’d set aside for the nectar inside. Expecting a shower of shards, I flinched, but the glass was sturdier stuff.

Considering this crazy level of carbonation, MOA Imperial Stout pours with a massive tan head that takes minutes to fade. The beer itself is dark as dark can be. What little light gets though highlights tiny bubbles at the bottom of the glass. The aroma is dominated by roasted malt and grain with a distracting bit of cooked cabbage.

This is definitely a stout – dark, roasted, and bitter with chocolate and coffee dominating. MOA puts a spin on this imperial stout by aging it in pinot noir barrels which definitely adds a fruity brightness and acidity that balances all the darkness. I noticed the beer getting sweeter (like a milk stout) as I went – probably a combination of the beer warming and my tastebuds getting used to the bitter elements. Even with the smokiness, I get a fresh white grape essence creeping in at the edges.

I expect stout purists aren’t going to like the winey bits about MOA Imperial Stout, but MOA doesn’t seem interested in being traditional. (Go back and check out my review of MOA Breakfast Beer.) As for me, I can like both smoky, chokey stouts and this relatively lighter, brighter dark.

Posted by Grahamopedia at 4:22 PM No comments: 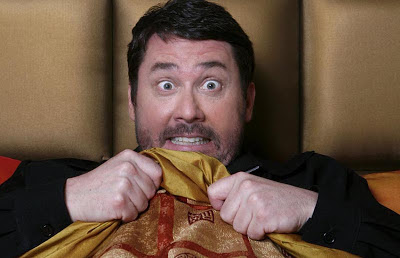 I used to write for a couple entertainment websites, but when they vanished, dozens of articles went with them. Since I'm going to see comedian Doug Benson at the Orlando Improv January 3, 2013 - and bringing a couple friends who've never seen him before - I pulled this January 2011 e-mail interview out of the ether.

There's still tickets as I write this. If you're in Orlando, buy some already ...

So what's changed for Doug since 2011? Back then, Comedy Central was still undecided about whether to order more episodes of The Benson Interruption, a thirty-minute show with Doug seated on stage, butting in while friends (including Nick Kroll, Tig Notaro, and Brian Posehn) did stand-up. The show didn't get renewed, but Doug now "interrupts" movies in LA and on the road. He's taking on Robocop and Dirty Dancing in Jacksonville. Enzian - let's get on this in Orlando for 2014!

Doug's podcast, Doug Loves Movies, has only gotten bigger in the last two years. Free on iTunes, Doug usually records around California where he's got access to guests like Jon Hamm, Sarah Silverman and Elizabeth Shue. The podcast is half conversational riffing and half movie trivia games. The Leonard Maltin Game is a lot like Name That Tune, but with actors instead of notes. After road stand-up dates, Doug usually invites the audience to stay and watch a shorter version of TLMG between the comedian he's touring with and an audience member.

Any stories of coming through or visiting Orlando before – either as a comedian or as a tourist? Any places (bar, restaurant, etc.) that you enjoyed?

I've been a Disneyland nut my whole life, so I love it when I get to visit the parks in Orlando. Several years back, I worked on a tv show that was shot at Walt Disney World and I got to live there for a month. It was heaven.

NOTE: Doug later remembered it was the MTV volleyball show Sandblast, hosted by Kevin James. Facebook has a bunch of clips, but on YouTube, I can only find the commercials.

On a more recent visit I got to go to Disney's Hollywood Studios during Star Wars Weekends. Two of my nerdy childhood obsessions merging into one. So awesome.

You’re playing a rock club in Orlando instead of a traditional comedy room. How does that change the audience you get and the interplay during a show? Do you prefer one over the other? Tig Notaro and Brian Posehn have also played Backbooth. Is it building a rep for comedy?
(Reminder -- this time, Doug's doing a one-night special engagement at the Orlando Improv.)

Comedy clubs are great but they get a lot of patrons who are coming for generic comedy. They don't care who they are going to see, they just want to laugh. Which is fine, but I've been doing it for so long, I enjoy it more when I play to a crowd who came specifically to see me, who know what I'm about. At a place like Backbooth, they only come for a specific band or comic. Everyone at my show there will know they are in for a lot of pot jokes, and possibly some movie trivia.

How did Doug Loves Movies start?
Someone asked me if I wanted to do a podcast, and I thought it would be fun to sit around with my friends in front of an audience and chat about movies. And I was right. I have a great time doing it, and people seem to enjoy listening to it.

Who's coming to your live shows these - The Marijuana-logues fans, the Doug Loves Movies fans, The Interruption fans?  Are you going to play The Leonard Maltin Game?

All of the above. And the game gets played at my shows where lots of people wear name tags. For those who don't listen to my podcast, people in the audience have a chance to win prizes during the Len Maltin Game if they wear name tags. It makes me feel like a cult leader, but it also let's me know if there are podcast listeners in the crowd.

ANOTHER NOTE: Best to be creative with the name tags. Here's a few that got picked for the podcast. 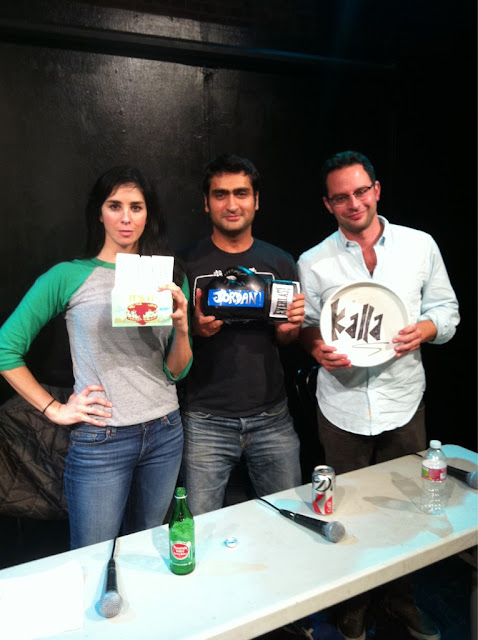 I remember you once saying that you’re a dancer in Captain EO. How did that come together? It’s playing again at Epcot. Have you seen it since the revivial? Can you spot yourself? Any tips for the rest of us on spotting you?

I've seen it recently at D-land in Cali, and I can still spot myself. It's hard to give tips though because the camera doesn't stay on me for very long. My dancing is terrible, but I'm honored to be a part of a Disney attraction.
Posted by Grahamopedia at 6:35 PM No comments: