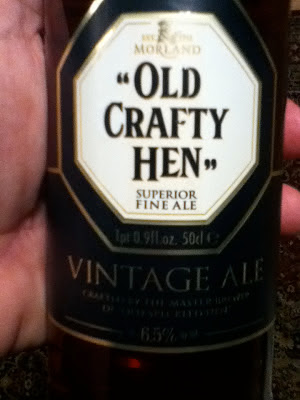 It’s St. Patrick’s Day as I post this and I didn’t think about that until a couple hours ago. So while I’ll be enjoying a Guinness in just a bit – fish bladders and all – I’m writing about a UK beer this week (first brewed in Oxfordshire, now Suffolk).

Old Crafty Hen is a blended beer from Greene King using the Morland brand. Most of the beer is Old Speckled Hen - a smooth English Pale Ale. Like Guinness, OSH is bubbled with nitrogen instead of carbon dioxide, which means it goes down very smoothly. The flavor of unblended OSH is malty and fruity, but not overly sweet on the finish.

Old Crafty Hen takes OSH and kicks in a percentage of a beer called Old 5X. Trick is, you can’t buy Old 5X. The brewery only uses the oak-aged brew to flavor other blended beers. The thought is that Old 5X is too potent to drink solo, like drinking peppermint extract instead of a Shamrock Shake -- assuming there’s peppermint in a Shamrock Shake.

Old Crafty Hen pours a darker copper than OSH with a quickly-fading light tan head. The aroma was a bit skunky, but it didn’t come through on the taste. The flavor is very much like OSH, but with more bite. I see a lot of folks taste “raisin,” but I’ll leave it at “dried fruit.” The oaky Old 5X imparts a deepness I associate with bourbon. I get vanilla and browned sugar, but a bitter finish keeps the sweetness from dulling the palate.

I’ve been a fan of Old Speckled Hen for years and the introduction of this more powerful cousin is welcome. Interesting that it only comes in single 50cl bottles instead of multi-pack cans or bottles. Probably has something to do with the higher alcohol content – 6.5% instead of OSH’s 5.2%. That hen can sneak up on you.
Posted by Grahamopedia at 3:03 PM