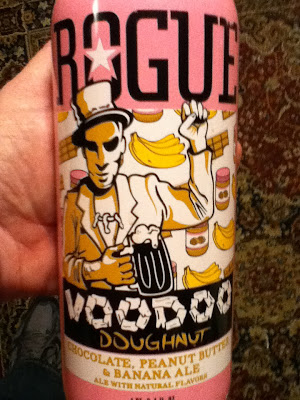 More a dare than a real beer, this is the second co-branded beer between Oregon’s Rogue Ales and Voodoo Doughnut. The first was the absolutely terrible Voodoo Bacon Maple Ale. I've tried it and I don't suggest you do. I don’t know anyone who didn't pour part of the 750ml bottle down the drain. Sounds fun, tastes evil.

Let’s keep an open mind on this new novelty Rogue. The roasted flavors of chocolate are common in dark beers. Hefeweizens are often described as having a banana essence. Peanuts are turning up in porters and could go well with malt. Hand me that church key.

On the pour, Rogue Voodoo Doughnut Chocolate, Banana & Peanut Butter Ale is a deep cola color that light barely passes through. The head is tan and lasting with lots of tight bubbles. I definitely get the chocolate aroma and there’s a whisper of sweetness that must be banana. No peanut butter coming through at all.

The first sip reminds be of that chocolate cherry diet soda that was popular a few years back – kinda artificial. The cocoa is right up front, but the banana tastes chemical and false. There’s a mustiness than I’m going to say is the peanut butter, but it’s really in the background.

By the second sip, everything but the chocolate begins fading until you’re left with a decent roasty ale with some off backnotes. Compared to the Bacon Maple stuff, this is at least drinkable, but Rogue already makes tastier brews … and for cheaper. Voodoo Doughnut Chocolate, Banana & Peanut Butter Ale is an excuse to sell you that crazy bottle for your collection of other crazy beer bottles. If you don’t have one of those, you can skip this.

Posted by Grahamopedia at 4:46 PM