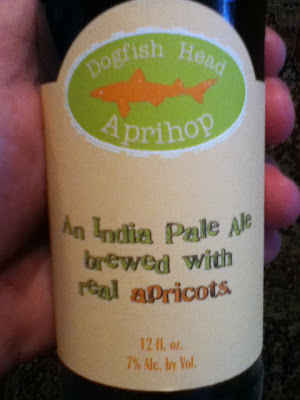 Go back over my reviews of India Pale Ales, and you’ll see I tend to think they taste a bit like apricots. When I spotted Dogfish Head Brewery’s ApriHop – a spring seasonal IPA actually brewed with the velvety little things, I was in. Dogfish bottles it in four-packs, calling Aprihop “a fruit beer for people who hate fruit beers.”

Aprihop pours a fizzy, rusty, orange with a hoppy, piney aroma very much like a big, booming IPA. I can smell the fruity apricot in the background, but it’s very close to pineapple too.

In the drinking, the apricot is buried, which is a little disappointing. If it’s in the name and on the label, you shouldn’t have to hunt for the flavor. At least the apricot does serve a purpose while hiding in the background. That faint sweet fruitiness mellows the double-barreled hops, buffing the raspy edge off the resiny green that makes an IPA.

Doghead’s Aprihop is a pleasant and (at 7% ABV) powerful IPA. I’d like to see a little more fruit in the flavor, but after a pretty dreadful flavored beer, I’ll take some subtle.

Posted by Grahamopedia at 3:50 PM