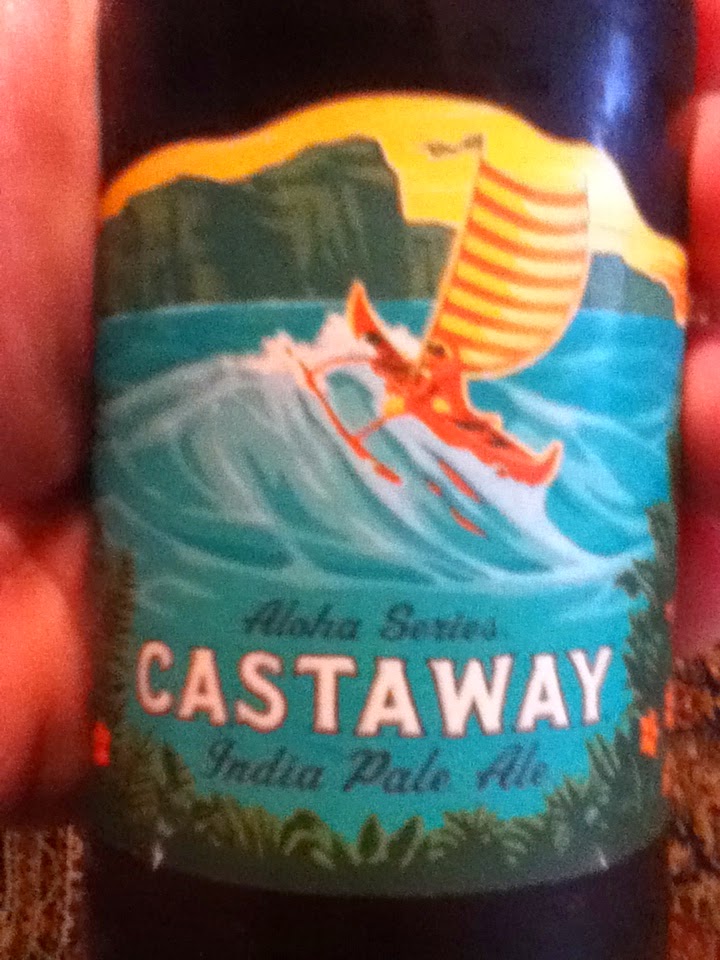 I was really surprised – delighted too – when I spotted KonaBrewing’s India Pale Ale here in Florida.  Kona’s been selling Pipeline Porter and Longboard Lager and Fire Rock Pale Ale on the mainland for years, but Castaway IPA was brewed and sold only in Hawaii. Kinda funny considering the (maybe) origin story of India pale ales is that all those hops kept beer from spoiling on cargo ships.

BTW, my six-pack of bottles probably came from one of Kona’s partner brewers in Oregon, Washington state, or New Hampshire.

IPAs are, of course, known for a green, piney flavor that some folks love … and some do not. IPA drinkers like to say that various varieties of hops can impart flavors of citrus or apricot or peach. Kona’s own label suggests Castaway IPA has notes of mango and passion fruit. Let’s see.

In a pint glass, Castaway IPA pours a clear golden yellow with a quickly-disappearing head. It’s a very hoppy aroma, as you’d expect. Maybe it’s my own associations of Hawaii, but I come up with hints of pineapple and lemon.

On first taste, it’s (yes) hoppy, but also light and bright. Citrusy, but still with a bit of the malt able to rise through. Maybe it’s the marketing, but I want to say it tastes “tropical” without nailing down any particular fruit. Bitterness is low, but it’s not overly sweet either.

A little Googling suggests Kona Brewing has tweaked the recipe a bit from the original “draft-only” recipe – played with the varieties of hops and dropped the alcohol content just a bit to 6%. That’s OK by me. I can imagine a cooler of Castaway IPA coming in handy whether you’re in Kehei or Cocoa Beach.
Posted by Grahamopedia at 2:45 PM